On 7th November the under 13  girls and boys teams travelled along the coastal road to compete in the Sotogrande Football Tournament. The teams consisted mainly of year 8 pupils as well as some strong year 7´s and several of the younger year 9´s that qualified for the age group.

The boys squad was in a tough group and very narrowly missed out on making it to the semi-finals, just conceding a 0-1 draw in the last game. They did however steal a convincing 3-0 victory over local rivals BIC. Out of 10 teams that entered the tournament, they ended up in joint fifth place. Most valued player (MVP) was Miguel Vidal , along with strong performances from Zach Comley and Connor Maguire  in defence. The girls just lost out in a tough semi-final but showed solid performances all round, particularly Lucia Pasleau on debut in goal. MVP however goes to Mar Manso in defence, who demonstrated excellent levels of fitness and competitive spirit.

All in all a very successful day with valid experience and lessons to be taken away from playing against tough opponents, with official referees. They are already looking forward to the next football tournament in March!

Video of the school 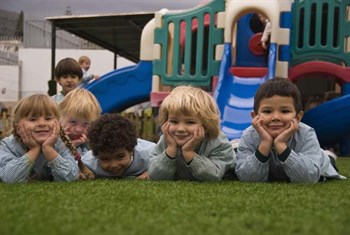 FROM 1 YEAR OF AGE. PRE-NURSERY, NURSERY AND RECEPTIONMore info